My girl has been on three mission’s trips. One of my favorite times is when she gets home, after she has slept off the jet lag and weary fog of travel has lifted enough to sit and have her “tell me all about it.”

The last was Honduras.  Something about this place tugs at the hearts of those who visit and beckons back. My brother goes often with his church and mine sends various groups to minister frequently. Missionary friends living there send updates and pictures of a place I have only heard of.

Maybe this place I have never been draws me so because I know of a hospital and an orphanage there.  Places that house the vulnerable and hurting. Places I haven’t been yet the kind of places where my heart lives.

My daughter and her team went to do unto Jesus as they visited the sick, the lonely, the estranged and the forgotten.

They prayed over children in hospitals beds where heat hung thick from no air-conditioning and for whom modern medical care had not yet made its way.

The next day the team went to an orphanage to love those who, for whatever reason, are left parentless.

I can’t help but wonder the reason the children who reside in an upstairs room were left alone.

A place for the most innocent, forsaken, and isolated.  I wonder who looked at their “imperfect” child and said no.

“Pure and undefiled religion before God and the Father is this: to visit orphans and widows in their trouble…”

My daughter went to up to one of the rooms, a little room within the larger special needs room where had gone yet.

In a crib, lying alone and shaking, a little boy came with a warning:  “He’s abusive.”

And as she touched the trembling boy who was never touched, he stiffened and bristled.

As the power of her gentle touch went through him, he felt the warmth of something so primal, yet rarely experienced except for diaper changes and basic care.

Then he relaxed.   As she told me this story, I pictured this fragile little boy breathing out and releasing the bondage of a life spent in a crib, unheld and lonesome – if only for a moment. 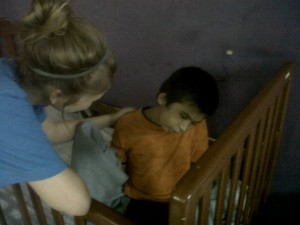 She went from child to child and touched the untouchable.

I think of Jesus touching the leper. Unafraid and only desiring to heal.

In reaching out to a little boy with Down syndrome who was known to scratch and bite, she stood unwavering- maybe because God equipped her through her brother who often does the same.

And even as he spit in her face, she remained unmoved.  Unshaken.

Because loving the different and misunderstood is messy.

“Hurting people hurt people” doesn’t just those who hurl insults or hit their spouses. Those with deep, inexpressible hurt longing to speak only to utter grunts often lash out in frustration.

So they are put into isolation.

The young men on the team brought down the bigger children who normally couldn’t because the “Tia’s” or aunts couldn’t lift them to watch skits, listen to teaching and just be with the other children.

Included and no longer isolated.

Young men and women held children for hours offering the comfort, power and promise of touch. Still I wonder who was touched more.

“If only I may touch His garment, I shall be made well.”

Healing power through a simple act we take for granted. Yet it can be everything to those who exist without it. Being the vessel through which mercy flows and rests on one small child.

And though my own ministry within my home- the very one who prepared my daughter- keeps me here, I can touch His garment through those who go.

And as difficult as it is for me in the natural to allow my own children to travel thousands of miles away, it is my sacrifice as they become Jesus to the neglected and lost.

“And the King will reply to them, ‘Truly I tell you, in so far as you did it for one of the least [in the estimation of men] of these My brethren, you did it for Me.’ ”

The least in the estimation of men.  I can’t help think of my own son and those like him who society has deemed as “least”.

But to do for them is to do to Jesus Himself.

They are not least in His estimation.

The Message bible’s translation reads: “Then the King will say, ‘I’m telling the solemn truth: Whenever you did one of these things to someone overlooked or ignored, that was me—you did it to me.’ “

The overlooked and ignored.

The children who couldn’t come down.

The ones rarely held.

My deepest desire is to do unto the One Who did it all for me. Doing as Him and being transformed into His likeness- heart by heart of those we touch.

Whether a nation far away, the grocery store, the workplace, the doctor’s office, a friend’s kitchen, a child’s bedroom, the walls called home –