Yesterday lights on my tree went out. We thought a plug came loose  – although we all know this could never happen since my kids and dog are so calm and never throw things or hit the tree.  I woke up thinking about how to do this.  I may have actually dreamed about it.

Therefore, today, I will take everything off and re-do my tree if necessary. Even though I need to shop and do a zillion other things, the tree is a priority.

Why? Needles will be everywhere and I will be sap-sticky and aggravated. Why I am I slightly obsessed (although after last night, Jerry would argue that the obsession is more than slight) over a tree? After all, it’s just a tree.

Is it because reminds me of Christmases growing up? Is it because for years when Jerry and I had no money to give each other gifts, the tree WAS my gift?  Is it all for the kids? Why is it that I, in all my frugalness and practicality, must have my real tree instead of buying an artificial one time and using it every year when that makes so much more sense?

A real tree looks uneven and has holes. When the lights are off, the branches look bunched up and the wires show. The ornaments look a little dull.

But when the lights are on, it becomes transformed. The wires fade into the green and the ornaments are illuminated. The imperfections are covered and it draws us to sit and enjoy it. It becomes beautiful and inviting. 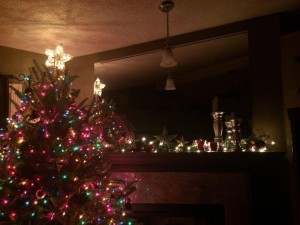 Kind of like us. We are real and messy, imperfect and full of holes. When Jesus comes to live in us, we take on His light and become light. We are still imperfect and bunched-up but His light covers us and illuminates through us.

His light is home. 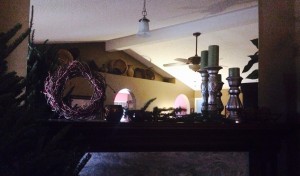