This fell out of my Bible the other morning. One of my favorite pictures of my boy. One that just seems to capture all that he is. 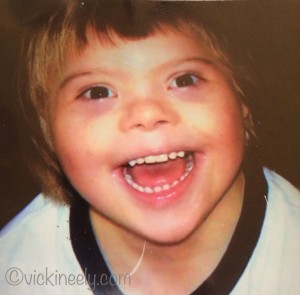 A few years ago, Joshua had surgery to have impacted ear wax extracted, ear tubes inserted as well as having his tonsils and adenoids removed.

This was the first time my husband stayed with him overnight at the hospital. We decided it best that he stay, since Josh had been going through behavior issues and had become increasingly harder for me to handle. Looking back, I realize I had never considered when he was an infant anything long-term. I blocked any frightening future and only considered the right-then.

My quiet time with the Lord the next morning consisted of daily Bible reading. Determined to read the Bible in a year, I followed the plan, often falling behind.

But that day – in black and white was my word from God.

I wrote it on a post-it note and put it on the back of the picture. 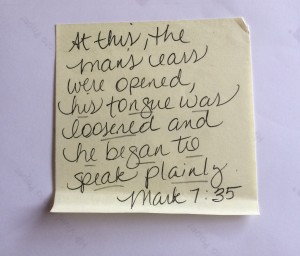 Because Joshua’s ears were just cleaned and cleared and opened by little tubes, now his tongue would be loose and he would speak plainly.

So specific in what I had always hoped for.

When Joshua was little, I thought we could have enough speech therapy so he wouldn’t sound like he had Down syndrome. I used to think people with DS sounded “deaf” and my pride took over as I told myself that my child would sound “normal.”

I shudder as I type this.

If I read this from someone else I would likely be angry and offended because my  perspective has changed so greatly. I also how shallow and selfish I can be.

But confession is cleansing and I confess I how prideful and arrogant I’ve been.

Pride is a dangerous thing. God opposes the proud. I am so un- proud of my pride and ashamed of my entitlement.

I’ve laid bare, pride stripped and feeling forgotten. I no longer care about plain. I just want words. And feel like that is selfish too.

I’ve heard that words aren’t always needed and I have myself said that Joshua has changed people without ever saying one.

I have been told I should be grateful in all that he can do. He has made amazing strides and has given us glimpses into things he knows that we never thought he did.

But Joshua does things that we don’t understand and he can’t make us understand. Some of them are potential harmful to himself and to us.  Right this very day we have a doctor’s appointment to seek answers for an issue that has been going on way too long and is taking its toll on him and our family.

Just two words would give us a starting point. “Josh hurt,” or “Josh sick.”

Actually one word would suffice. “Mad”.

Anything to know what he is feeling and why he does the unexplainable.

He has therapy to lessen his frustration by increasing his communication and he has made great strides.  Many times, we know exactly what he wants.

I know – sometimes words are not needed.

Some parents of non-verbal kids have said they have a secret language. I get that. I can “read” Joshua pretty well and he can communicate his basic needs of hunger or thirst by taking our hand and pulling or simply grabbing what he wants.

But there is something about words.

As a writer, I love words- their sounds and the way they paint a picture in one’s imagination that is so intimate to the one reading. Or listening.

When  I talk to people with Down syndrome and am both amazed and envious.

For years I’ve ached to hear, “I love you Mommy.” I waited to hear his cute phrases and word mix-ups and all those funny things that I have written down from my other children.

My mama’s heart still longs to hear his voice, though now it is more of a man’s than a boy’s. And that leaves me feeling a bit cheated.

But really, I want it more for him than for me, so that he can express himself in more than grunts and limited signs.

I remember a friend years ago describing a special-needs girl, saying that she couldn’t talk and made “retarded sounds.”

I know the sound. I live with that sound. It resonates through the rooms and blends in the walls.

I’ve been asked if it gets on my nerves and if I’m honest, I would say yes, sometimes.

But I am afraid to be honest because the sound-maker was almost taken from me. The sound means that he is here with me and my gratitude at God’s grace leaves me with a sense that I shouldn’t complain.

But my humanness longs for words he can’t form no matter how hard he tries. My soul cries silently while I smile at him as he pushes out a sound that makes no sense.

I can’t lean to my own understanding because I don’t know how or even when autism took over and stole his voice.

And the point in which I no longer cared that he might sound as if he had Down syndrome.

It is no longer the enemy.

But I’m broken and helpless over his frustration.

I hear mommies say to young children,  “Use your words,” and hope they realize how blessed they are to say that.

I listen to animated and greatly detailed stories from my youngest with eagerness because I don’t take for granted that he is able to express himself so brilliantly.

I am a talker and a listener and love teenagers in the kitchen telling stories and laughing and often watch Josh take it all in and wonder if he knows he’s missing out.

Even as I type, I hear the sounds of silent. The noises of the non-verbal.

In a conversation with my mother-in-law, I mentioned that Josh listens to this counting song over and over and that if he could talk, I bet he could count.

I bet he can read, as he recognizes words on his movies and can “match” them to their cases or knows if that movie is playing.

So could he read? Isn’t reading the recognition of letters, really? Letters arranged so that they take on meaning in their form. But he can’t “read” because he can’t speak.

So why can’t he speak?

She asked if he had speech therapy. yes, but only to the extent of other forms of communication. One can’t work on speech that isn’t there.

And as we talked, I started saying words I had never thought through, yet seemed to make perfect sense – to me, at least.

Signs with Joshua must first be done hand-over-hand, as with most everything we introduce to him. He generally does not imitate. Seemingly endless repetition leads to his mastering the task and eventually, he learns a sign will get him what he wants.

Neurotypical children learn imitation quickly. As a baby learns to talk, he babbles and soon imitates what he hears – words. A parent tells the child to say a word, and eventually will, forming vocabulary.

I realize there is really no way to “show” Joshua how to talk.

He makes noise, so his voice “works” but he cannot form words.

I don’t know why he doesn’t imitate sounds – is it because of cognitive delays, or autism or because he doesn’t know how to form the words. I can’t jump in his throat and “hand-over-hand” a word physically like I can for signs or tasks.

And as I explained this, she merely said, “That is a shame.”  And I guess it is, because I cannot find anyone who knows how to make this happen and I don’t either.

But instead of wondering why, or asking if I caused this or even what can I do, I look to Jesus, Who Himself said, “It was neither that this man sinned, nor his parents; but it was so that the works of God might be displayed in him.”

God isn’t finished with Joshua. Or me. Or any of us.

Through Joshua, I’ve learned to not for granted things that come so easy for most of us. I have learned to rejoice in the simple and am in awe of the mundane because it is difficult for many.

The works of God are displayed in him whether he talks or not. But I don’t think He wants me to stop asking. We are to seek and we are to pray and we are to believe.

In the meantime, His grace is sufficient.