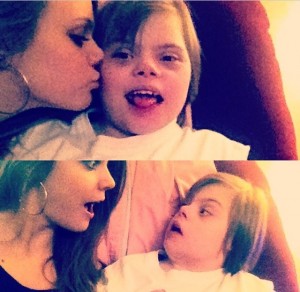 A slight blush shone through his little freckled cheeks and small tears hung in his blue eyes. His head hung a little low, and I knew what was coming.

“Mom, those kids were staring.”

His face couldn’t hide the mixture of embarrassment and self- ashamedness for being embarrassed by his older brother.

This kind of embarrassment only comes with having a stare-worthy brother.

As we parked for our end-of the-year celebratory lunch for Josh, I felt a twinge of angst. My eight-year old asked if we were taking the food home.

“Don’t you want to eat inside? What do you want to do? “I prodded and probed for his true “why” for asking and though he said it was fine to go in, but the truth was the proverbial elephant in the room.

Embarrassment.  And shame for being embarrassed.

Embarrassment is an emotional state of intense discomfort with oneself, experienced upon having a socially unacceptable act or condition witnessed by or revealed to others.

Joshua’s condition is considered socially unacceptable by some.

And though he does not know it, those who love him do.

His brother doesn’t want to feel this way.

But he’s eight. And things are a big deal at eight.

So as I tried to explain that they may just be curious, and even if they weren’t  we need to stand up for Josh and not worry about what others think, and people just don’t know what our lives are like and all the blah, blah, blah…

In my ramblings, I struggled between anger at those boys who were staring and my boy embarrassed about it and myself for feeling it sometimes myself.

I will clearly state that we not embarrassed by Joshua. We are not ashamed of him. Embarrassment creeps in rises up when those who do not understand him make us feel like he is less.

I needed to glimpse into my young son’s heart. As my own heart poured out sympathy and shared his pain so intensely, I felt Joshua’s pain unaware. My soul tore for each for different reasons.

“They think he’s weird. And that might mean they think I’m weird.”

“Well, I’m weird,” I said in some lame attempt to somehow make this whole “thing” better.

Then I told him that we needed to love Josh more than what people thought about him.

My oldest son, who often does with Josh what I cannot, had moments before pulled him out of the booth when he didn’t want to leave , put him in his car seat, then took him out of the van when we arrived home.

As we walked in, my soft-spoken and gentle son said to his youngest brother, “You know, I used to feel that way too.”

And I asked, “What changed your mind?”

He simply stated: “What you said.”

I can’t change people’s minds. I can’t know what they are thinking. I don’t know if they are curious or think my son is weird.

I don’t know if they are whispering prayers of thanksgiving that they don’t have a child like mine.

I could say I don’t care.

I hate that we look at people through our eyes instead of God’s.

Later, we talked a little more and I asked him if he felt bad for being embarrassed and he said he was. Because he loves his brother.

But he said that people think Josh is stupid and they might think he’s stupid.

I can love my son more than what people think about him.

And what can we do about it?